on January 16, 2012
Best Performance by an Actress in a Supporting Role in a Motion Picture: 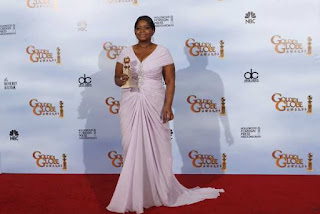 Octavia Spencer bounced between humor and solemnity quite a few times backstage on Sunday after her Golden Globes win for supporting actress in “The Help.”

Spencer played the no-nonsense Minny Jackson who is famously known for her quick wit, delicious fried chicken and pies.

At one moment she assured members of the press that she was “not sleeping with Brad Pitt,” and that she wouldn’t because she was afraid of Angelina Jolie. “I saw 'Salt.' Did you see 'Salt'? She can take me.”

She became serious when asked how uncomfortable she thought people were confronting the difficult question of racism in American history. “While the characters are fictitious, the narrative itself is a part of our fabric, and it’s important that we keep the younger generation abreast of where we’ve come from because it’s so foreign to them.” 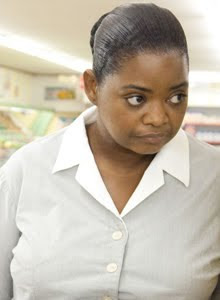 Octavia Spencer in "The Help"

After some tough talk about getting past the pain of racism and moving forward with healing, the buoyant actress was suddenly struck by a moment of joy and levity and was moved to take off her high heels.

“I’m sorry ya’all, I love you but I have to kick these shoes off. This is the ultimate party and I’m living the dream of so many young actors and actresses out there and I’m having my Diet Pepsi alongside Hollywood’s best and brightest.”

And that’s why she feels so good tonight—so beautiful, she said. “I’m happy in my own skin…. It’s living in your own skin and being proud of who you are.”