Light-N-Bright! Beyonce is Too Damn White! 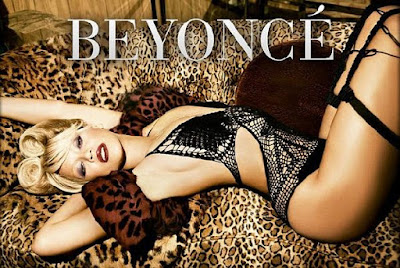 Beyonce is back under the microscope after giving birth to Blue Ivy. A new photo of the superstar is featured on her website and on promotional ads for her latest album that captures Bey with a lighter, brighter skin tone.

At first glance you could mistake her for a lightly airbrushed white skinned Victoria’s Secret model. But then with a closer look you notice it’s actually the singer.

With the blonde hair and beaming camera lights, it’s hard to tell the woman is Black.

Critics all over the net and in the press are questioning the singer’s motives, as her image has slowly began to fade into white. Some say the whitewashing of her image is sending a damaging message to the world, but most importantly to Black youth.

“It’s like, Again? Are we here again? I think in a lot of ways shes culpable because there’s history there,” he writes. “She’s not saying explicitly you have to lighten your skin, but it does carry that inherent message.”

But this isn’t the first time the singer has received such strong criticism from her Black observers.

It seems that her image over the years have progressively become lighter and blonder.

Ugandan-born British writer Yasmin Alibhai-Brown shames the singer for abusing her mass appeal, especially due to the affect it has on young Black kids.