Who You Calling Angry Black Woman? 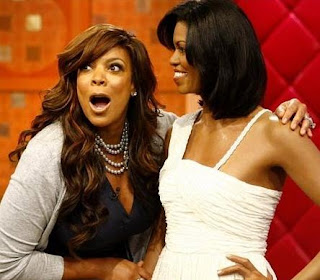 The talk show host said if you are going to call anyone an “angry black woman” don’t look at Obama, but someone like Nene Leakes.

“The Wendy Williams Show” (weekdays on Fox) doesn’t usually get political, but when Williams heard that Michelle Obama was defending herself against being described as “an angry black woman,” she sprang to the First Lady’s defense. “If you’re a black woman and you have something to say and you say it like you mean it, everybody portrays us … as an angry black woman,” Williams said.

Williams then pointed out that a somewhat similar critique was leveled at another smart, powerful First Lady, Hillary Clinton, who Williams remembered was called an “angry lesbian woman” by her detractors. “As soon as you get a little strong, then okay, you’re a lesbian,” Williams lamented.