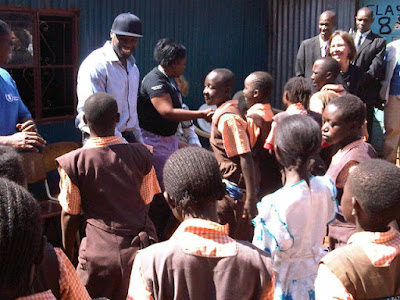 50 Cent flew to Dolo, Somalia on Wednesday with the World Food Program to see firsthand the effects of hunger in Somalia and Kenya.

WFP confirmed that the rap star, whose real name is Curtis Jackson, has committed to provide 1 billion meals for the hungry, and is donating to WFP 10 cents from every sale of his new energy drink Street King.

50 posted a clip on Youtube detailing his reason for wanting to feed hungry African children.

“I grew up without money but I didn’t grow up hungry… When I was out in Africa, it was unbelievable, the devastation and desperation of people who don’t know when they’ll receive their next meal” he said. “I want to feed a billion kids and I need your help to do it. I need you to utilize your energy, your voice, to provide additional motivation for me at times.”

The U.N. last week declared an end to Somalia’s six-month famine, though it said tens of thousands of people still need food aid to survive. The British government estimates that between 50,000 and 100,000 people died from the famine’s effects.