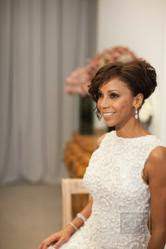 After 17 years of marriage, Holly Robinson Peete and former NFL star Rodney Peete, renewed their vows on top of the Empire State Building. Peete was wearing beautiful pieces from De Beers diamond jewellery for this occasion:


Celebrity event planner Colin Cowie created this event, as well as designing the couple’s 1995 ceremony. De Beers Diamond Jewellers will also partner with Colin Cowie Weddings on February 14th for the annual Valentine’s Day Weddings Event, held at the Empire State Building, the iconic landmark on the world’s most romantic day of the year. Four lucky couples will exchange De Beers wedding bands and say “I do” after receiving their own private, personalized wedding ceremonies created by Colin Cowie at the Empire State Building on Valentine’s Day, the only time when couples are able to marry at the building.