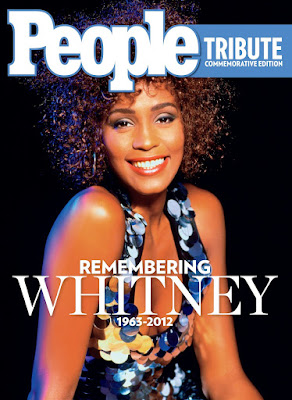 On Shelves Today
PEOPLE magazine announced the release of the commemorative book Remembering Whitney, 1963-2012, a tribute to the legendary singer and actress, who died suddenly on the eve of the 2012 Grammy Awards. The 96-page commemorative soft cover book, which hits newsstands today, is rich with photos and insights on the remarkable life and career of the award-winning singer. The hardcover version of Remembering Whitney, 1963-2012, is available beginning May 10th wherever books are sold and can be ordered online at www.people.com/whitneybook.

Hers life was a dream come true. Whitney's journey to stardom is a true tale of beauty, soaring talent, and the risks. Coming from a lineage of talent and diva's, Whitney Houston was born to sing. Her mom, Cissy Houston, is a noted gospel singer; Dionne Warwick was her cousin, soul great Aretha Franklin her aunt. And Whitney was beautiful.

Before she ever had a big radio hit, a teenage Whitney was booking modeling gigs in major magazines. One night, legendary talent guru Clive Davis heard her sing in a club and signed her to Arista Records at age 19. Her first album, Whitney Houston, spawned three No. 1 hits and made her a staple on MTV and years later, The Bodyguard made her a movie star.

The rest is history. Some of it good, bad and ugly. It was Whitney. Packed with photos and insight, PEOPLE’S Remembering Whitney, 1963-2012, looks back on the remarkable life and career of one of the world’s greatest vocalists.