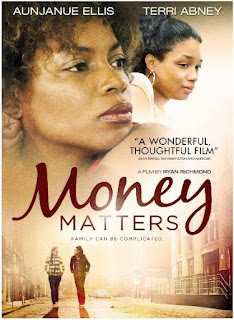 The Spaghetti Junction Urban Film Festival and Colour of Cinema presents award-winning filmmaker, Ryan Richmond as he makes his feature directorial debut with an inspirational drama in MONEY MATTERS. The film follows 14 year-old Monique Matters (Terri Abney) aka "Money" -- caught at the brink of adolescence. Her relationship with her mother Pamela Matters (Aunjanue Ellis - RAY, MEN OF HONOR), is far from stable and depicts the struggle between a young mother and daughter who both come of age...together. Sharp and candid dialogues blur the roles of parent and child, revealing a family secret magnified by pain and years of regret. Money's daily routine; a three-bus commute to the Catholic school she attends, far from her dilapidated neighborhood, to another world where she feels just as uncomfortable. When she befriends a neighborhood girl who seems to understand her, their friendship develops in ways that push boundaries.

Pamela wrestles with her personal demons by thrusting religion onto Money as a way to repent for her own mistakes. This intensifies the rift between them but ultimately strengthens Money. She copes with all the turmoil through her poetry but keeps her writing to herself. Love, loyalty and faith are tested when Pamela learns she has contracted HIV and her health is quickly deteriorating, forcing her to reveal the truth about her past and Money's father.

MONEY MATTERS is a moving and intimate exploration of a single mother and her teenaged daughter as they trudge across terrain of doubt and insecurity in search of self-discovery.

View trailer below. Space is limited. RSVP is required