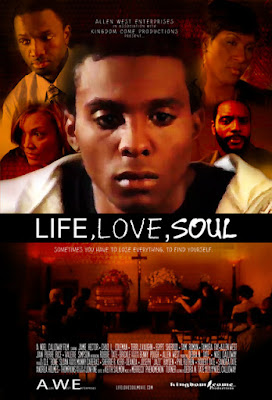 Life, Love, Soul is a gripping dramatic tale of what it’s like to literally lose it all and brick-by-brick rebuild a life. This is the story of Roosevelt Jackson; a privileged high school senior being raised along with his younger brother Clinton by his mom Kimberly Jackson a high powered attorney. Growing up in the affluent Park Slope area of Brooklyn, Roosevelt had a promising future, friends and no worries. His only dilemma is choosing what college to attend, Syracuse or UCLA. Then life changed one day when an out of control SUV collided with his family’s car taking the life of his mother and brother leaving him all alone. Forced to reunite with his absentee father, Roosevelt was forced to live in a poverty stricken area that took him away from all the comforts of home. Things were very different and much like the uncontrollable car accident, Roosevelt’s life spiraled out of control with no breaks.

So I caught up with Robbie Tate-Brickle, the star of Life, Love, Soul and got to know a bit about the man and learned that Roosevelt Jackson’s life is actually the true life story of director Noel Calloway. The two met at the premiere and talk-back session of Black Out, a film Robbie was featured in. Impressed with what he saw, Calloway offered him the part on the spot. Gracious, humbled and still getting his acting feet wet, Robbie accepted the role and began the transformation into Roosevelt Jackson.

Having the director at his disposal and seeing how the characters life goes from light to dark, Robbie credits his preparation for the role by learning to relate to life from a 17 year-old perspective. Though acting wasn’t his first choice, he was an athlete first. When he was a kid, Roosevelt did spend a little time on the most famous street in the world, Sesame Street. He also joined the cast of the TV series Bloopy’s Buddies for a stint as well.

After I spoke with Robbie, I had the chance to chat with Mia Michelle who plays Kyra Tate. Kyra is new student at school and Roosevelt’s girlfriend. Just when life start turning around for Roosevelt, Kyra throws offers another blow to an already volatile situation. Kyra fears she may be pregnant.

When asked about having kids, both Robbie and Mia are single with no kids and have never had any close calls to speak of. However, knowing friends who have been in a situation like that of Roosevelt and Kyra, the two actors know the fear a situation like this can present.

When asked about challenges of the role, Mia recalls having to cry wasn’t something she was trained to do on cue. With no professional training, Mia identified with Kyra once she read the script. Even with intimate scenes, the two contend that the whole cast was like a big family and when the time came Robbie says, “It was natural and we hung out before. We knew what to expect. When we’re in the zone; we’re in the zone.”