Oprah's Next Chapter with Bobbi Kristina 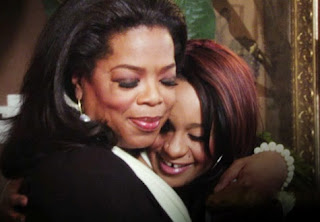 Oprah Winfrey landed the coveted opportunity to sit down with Whitney Houston’s daughter, Bobbi Kristina for her series “Oprah’s Next Chapter.”

She also spoke with Whitney's brother Gary and her sister-in-law, Patricia Houston as well.

From the sneak video teaser below, we know that Oprah asked: “Does it feel real yet [that she's gone]?” and ”As a big brother, how did you feel about Bobby Brown?”

“Oprah’s Next Chapter" airs Sunday, March 11 at 9pm Eastern/Pacific (8pm Central), with Bobbi Kristina sharing personal memories of her mother and how she would like her to be remembered. Also, the Houston family addresses the rumors and speculation surrounding Whitney’s death.


After Whitney's death, more details about both their lives have been unearthed, shocking fans.

RadarOnline reports that Brown was homeless for a while after he and Whitney split, and it seemingly took a toll on his relationship with his daughter Bobbi Kristina.

“Whitney took Bobbi Kris without my prior knowledge or consent, and moved to Orange County, California, where Whitney received treatment for her drug addiction,” Brown claimed in court papers surrounding his battle with Whitney for child support. “Although I was having severe financial problems, I did all I could to see my daughter.”

“I came to California to be near Bobbi Kris. I also paid approximately $10,000 for Whitney and Bobbi Kris to live in a nice hotel while Whitney was going through rehab. At the same time, I basically lived out of my car,” said Brown of his homeless status.

Bobby contends he attempted to work things out so he could see his Bobbi Kristina, but Whitney fought hard to keep things the way they were.

She reportedly told the court he was “fully capable of working and earning substantial sums of money if he could control his personal behavior.”

Bobby lost the court case and Whitney maintained custody of their daughter.