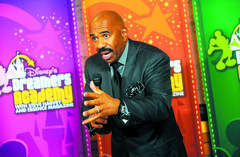 ed on to do a nationally syndicated daytime TV talk show, producers considered basing the program in Connecticut or New York. Harvey’s current hometown, Atlanta, was in the mix too.

“It’s such a great city,” said the stand-up comic, author and TV and radio personality. “The restaurants are great. The neighborhoods are great. The downtown is probably one of the best downtowns there is. If I’ve got to take my family somewhere, I’ll take them there.”

Harvey already has a real estate agent scoping out potential new homes in the city for him and his wife, Marjorie, and the youngest of their seven children, Lori, 15, and Wynton, 14. (It won’t be Rosie O’Donnell’s $2.5 million Lake View pad.)

The family plans to move here in June, a few months before the debut in autumn of his hourlong talker, “Steve Harvey,” taped before a studio audience at NBC Tower. The show will air in Chicago at 2 p.m. weekdays on WMAQ-Channel 5.

Harvey is still undecided about which neighborhood he wants to live in — or which baseball team he’ll root for. But he’s sure about one thing: Life is about to get pretty hectic for the “Family Feud” host and radio star, who will broadcast his long-running morning show from the WVAZ-FM (102.7) studio downtown.

“It’ll be busy but it’s a blessing and I’ll take it,” Harvey said. “It beats sitting around wondering where the next gig is coming from.”

Q. How will your TV show be different?

Steve: There’s not a lot of male viewpoint on daytime TV. I’ve got kids. I have a wife. I think that’s a unique perspective. Above all else, there’s nobody in daytime TV that can beat me at the funny thing – except Ellen DeGeneres. She’s my girl. I love her. Other than Ellen, I think I’m the guy who’s gonna put more funny on television.

I’m going to take something from the old “Carol Burnett Show.” I’m going to walk out and talk to people. As a stand-up, I’m very good at talking to everyday people and being funny on the spot. That’s my forte. That right there is going to be a little different. After that, we’re going to get into some segments that aren’t there right now. I can’t give it away because I need the viewers.

Q. Will you have celebrity guests?

Steve: Not many. This show is going to be “real people” driven. I’ve been hosting “Family Feud” for almost 400 episodes. Not one single family has canceled. Celebrities cancel all the time. I found that dealing with everyday people — they have a lot more interesting stories. Celebrities don’t come on TV to be very open about anything. They come on to promote stuff. I want a show that’s going to inspire people and uplift people. It’s going to be a very positive show with a male perspective to it. I’ve made myself a champion for women for a lot of years now, and I think that will come through on the TV show.

Steve: I’ll get up at 3:30, work out to 4:15. Get dressed, head over to the [radio] studio. I just need to walk through the door two minutes before 5. I don’t do any prep for my radio show. They’ve been begging me to do that for seven years. It doesn’t work for me. I’ll do that until 9 o’clock. I’ll sit down and eat and head across the street because NBC studios are right across the street from the radio station. I’ll prep for today’s show. Hair and makeup is a really quick process for me. Then I’ll start taping the show. Then it’s off to dinner with the wife and the kids.

Q. Are you hoping to capture some “Oprah” magic in Chicago?

Steve: Oprah did a lot for me by putting me on her show with the book and everything. If I could get a portion of that success, that would be great. We’re going to have a post meeting after every show. I learned that from Oprah, who was brilliant at that. Right after every show she had a post meeting to go over what worked and what didn’t work.

Q. Will you get a new studio at NBC Tower or inherit Jerry Springer’s old digs?

Q. Where did you used to live in Chicago?

Steve: I lived on South Wabash in a high rise. Of course, I wasn’t doing as well as I’m doing now. I had some rental furniture in there. My wife won’t tolerate that this time.

Q. You’re going to keep your house in Atlanta but spend most of your time living in Chicago. Which will be home?

Steve: My home is wherever my family is. As long as I’ve got my wife and kids — this is the person I’ve turned into. Ten or 15 years ago, this would have been a disaster. When I was touring with the “Kings of Comedy” and all that, I was a different guy. I’m very stable now. When you find the right relationship, I think that can change a man. As long as I got my wife and my kids, I’m very cool with that.

Q. What did your kids say about moving to Chicago?

Steve: They’ve got their friends here [in Atlanta], so quite naturally they weren’t really keen on the move. But they understand this is what I do for a living. Dad’s old. This is his last shot. My kids don’t really have a choice. Since they don’t work and make any contribution to either place, they’ve got to go with whatever Mom and Dad come up with. They just want make sure that they can meet some new friends up there in Chicago. They want to know if they can decorate their own room. I said yes.

Steve: That’s an ugly question! Definitely a Chicago Bulls fan, all day. I picked the Bears a lot in all my NFL picks last year. Haven’t decided on the baseball team yet.

Q. What do you make of Rosie reportedly leaving Chicago and taking her TV show to New York?

Steve: I hope it works out for her because I really like her. I think they’re still trying to find the magic in that show. She certainly had it in her old show. If I was Rosie, I’d just do Rosie. Rosie works. But it doesn’t affect me one way or the other. I’ve got to go up there and do the best I can do. There’s enough room for everybody. If she was up there I’d swing by and say hello.

Q. Are you nervous about this next chapter in your life?

Steve: I’ve never done this before. I’d be kidding you if I didn’t say I wasn’t nervous about it. I’m excited at the same time. It’s like a roller coaster: You’re having fun but you’re scared to death. When I’m a stand-up and I’m about to go on stage, it’s like walking out and stepping off a cliff. I just hope the [parachute] opens, it works real well and it’s a nice enjoyable ride. Because if you start falling and that chute don’t open, you’ve got problems. Let’s just get to Chicago, open that chute and hope it works well. I’m trusting in God on that one. He hasn’t failed me yet.

This article is being reposted and originated on suntimes.com and written by Lori Rackl TV Critic/lrackl@suntimes.com.