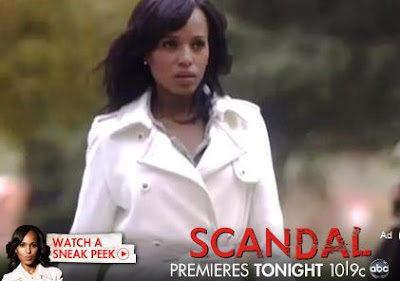 “The way we sort of set the show up is we didn’t necessarily take actual cases that Judy has worked on because she’s very loyal to her clients and keeps their confidentiality, and we don’t know all those details,” Rhimes told TV critics about the involvement of Smith, who serves as an executive producer. “But I would call her up and say, ‘What if I have this conservative soldier who is secretly gay who just won a Congressional Medal of Honor? Like what would you do in this instance?’ Then she would tell me, ‘Here’s how I would solve this problem.’” 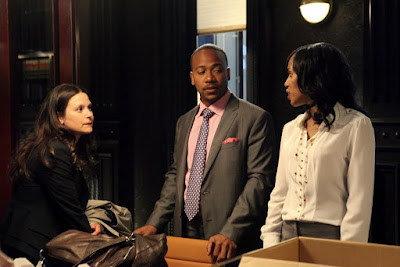 The gay soldier dilemma is just the B-storyline in Thursday’s pilot. A bigger scandal involving the President of the United States (Tony Goldwyn) and an intern is the main focus of Olivia Pope (Washington) and her staff of loyal employees played by Darby Stanchfield, Katie Lowes, Henry Ian Cusick and Columbus Short.

“One of the things that about the show that’s fascinating and interesting is the pace in which we speak our dialogue,” said Short, who plays the impeccably-dressed Harrison Wright. “I think that speaks to the characters of who they are. They’re in a fast paced world, and I like to talk fast. And so that was something I clicked into right away.

Rhimes, who also wrote the pilot episode and somehow juggles this with her other dramas “Grey’s Anatomy” and “Private Practice,” said “Scandal’s” fast pace was influenced by her love of “The West Wing,” yet another DC-based drama immersed in politics.

“I thought the writing on that show was great,” she said. “It was interesting because part of ‘Scandal‘s’ pace was born of me not wanting actors to linger in the moments, you know, in the sense it’s a world in which everyone is really incredibly busy, and there’s no time to feel your feelings.”

Shonda’s creative partner Betsy Beers adds, “It’s funny how much you can get in if you talk really, really fast.”

Below, “Scandal” star Kerry Washington talks about the joy of working with Shonda Rhimes, getting to know Judy Smith and the work experience she refers to as a “master class.”