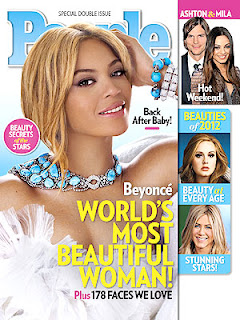 She's an entertainment force of nature, 16-time Grammy winner, and beauty and style icon. But Beyoncé is proudest of one title that also happens to be her most recent: mommy to little Blue Ivy Carter.

"I feel more beautiful than I've ever felt because I've given birth," says PEOPLE's 2012 World's Most Beautiful Woman. "I have never felt so connected, never felt like I had such a purpose on this earth."

The "Crazy in Love" singer, 30, and her husband of four years, Jay-Z, 42, have gone gaga for Blue, born Jan. 7 in New York City. "She's just the cutest thing," gushes Beyoncé, who croons one-of-a-kind tunes to her daughter and professes to "love" changing diapers.

So who does her daughter most resemble? "She looks like Blue," says Beyoncé, who is back to her pre-pregnancy weight and gearing up for her first post-baby concerts, Memorial Day weekend at the Revel Atlantic City. "She's her own person."

"The best thing about having a daughter is having a true legacy," she adds. "The word 'love' means something completely different now."

For more of Beyoncé's exclusive interview – in which she shares her beauty secrets, reveals how she lost the baby weight and sets the record straight on all the rumors – pick up this week's special issue of PEOPLE, on newsstands Friday