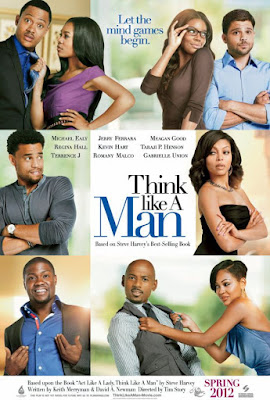 What happens when you have a group of guys who think they rule in the game of love?
Steve Harvey happens.
I went to see Think Like A Man and after having read the book, I was happy to see that Steve actually allowed the men to have feelings and live through their experiences like men. I enjoyed the male bonding time and how they all helped one another work through their women issues. It was refreshing to know it wasn't just women who corral one another into liquor induced bashing episodes when things don't go well in relationships. Men can be bitter too.

Like the book, Steve pokes fun at the mama's boy, the unemployed dreamer, the playboy, commitment phobe, unhappy husband and the guy everyone hates...the man who loves being a husband and father. He couldn't possibly be that happy, could he? 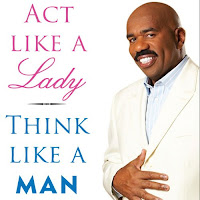 Think Like A Man follows this group of male friends as they dyfunctionally navigate relationships with equally dysfunctional women who desperately want happiness without losing their self respect and giving away the cookie (S.E.X.) to some undeserving man whore. In the movie, the women (Gabrielle Union, Regina Hall, Taraji P., Henson and Megan Good) use the book like a blue-print to the ring and the man's heart, but not without a few bumps in the road...of course.

The women have their issue too. What man wants a woman who stacks the deck of expectations no man can meet? How do you date a baby mama? How do you refrain from sex with a crazy hot woman who puts you through a 90-day no sex rule and how do you take it when your woman says grow up and get a real job or I'm out?

Think Like A Man is a movie that could be a date movie, girls-night-out movie and yes, even a guys flick. Kevin Hart delivers the comic relief that everyone can relate to and even empathize with. He even has a girl...Wendy Williams. Like giving a whale a tic-tac, Kevin is the grown ass little man with a big woman. Michael Ealy and Taraji P. Henson have immediate chemistry from the first glance and it's consistent throughout but Megan Good is refreshingly funny as she tries hard to stick to her go sex free to a point she pulls the granny-panny trick to discourage getting to third base with on screen hottie Romano Malco. I rooted for Regina Hall's single mom character when she came up against a mom she could not compete with boyfriend Terrence J. I've been there and its no fun. You just wanna send baby boy back to his mama if she has a hold that strong. Lastly, I had no sympathy for Jerry Ferrera's grown man stuck in his adolescent lifestyle. How dare you not grow up and expect a woman to live amongst your ceiling high omage to Marvel comic heros? Gabrielle's character had to show him how its done and opted out rather than live like one of the boys.
Think Like A Man is not short on cameos. The red carpet rolled out in the casting for this movie. Guest appearances in the movie included:Jennifer Lewis, Kelly Rowland, Super model Toccara, LaLa Vasquez, Chris Brown, Morris Chestnut, Wendy Williams, Keri Hilson, radio hosts J. Anthony Brown, Tommy from the Steve Harvey Morning Show, Steve Harvey and more. 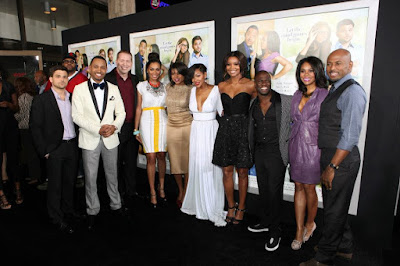