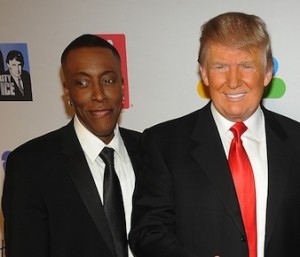 Determined to NOT be another #2 guy trailing the #1 guy, Arsenio Hall fought tooth and nail to claim the spot of NBC's Celebrity Apprentice. He beat out Clay Aiken who was a formidable opponent and never gave up.


Does this age me that when Arsenio Hall made it onto “Celebrity Apprentice,” many young viewers of the show didn’t even know who he was?

Many older viewers wonder what happened to him since his late night talk show. He joked that NO, he is not dead although rumors say otherwise.

Since many wanted to know what Arsenio, keeper of the late night dog pound has been up to, we compiled this list of things you probably didn’t know about the “Celebrity Apprentice” winner. Check it out a clip from his 1990's show:

1. Late Night History
Arsenio Hall was the first African American host of a late night talk show with the “Arsenio Hall Show” which ran from 1989 to 1994.

2. Rappers and Hip-Hop artists
He was the first late night talk show to bring on rappers and hip-hop artists as performers.

3. Why was Arsenio’s show cancelled?
After a few years of high success and ratings, the show began to struggle due to Letterman coming on at CBS. Additionally, the last straw for Paramount, the parent company of the show, was when he allowed Minister Louis Farakkhan to come on the show and speak for an hour. Paramount then had enough and ended the show in 1994 after being on the air for 5 years.

5. College Graduate
He attended Ohio University in Athens, Ohio, majoring in communications, though he transferred, and graduated from, Kent State University in Kent, Ohio.

6. From Advertising to Stand Up Comedy
Arsenio started his career out in the field of advertising and immediately moved into stand-up comedy which was one of his dreams.

7. Arsenio the Party Kid
At age seven he became interested in magic and also performed at everything from birthday parties to bar mitzvah singing and dancing.