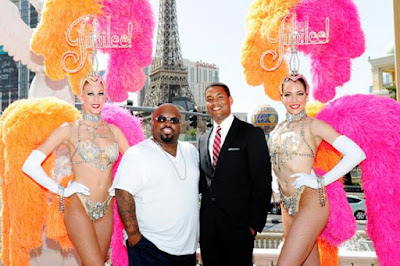 Looking rarely normal, the ever eccentric CeeLo Green is slated to join the list of performers at the 2012 Billboard Music Awards.

Pictured above with editor M. Tye Comer and a pair of Jubilee! Showgirls, CeeLo joins Justin Bieber, Carrie Underwood, LMFAO and The Wanted as announced performers at the May 20 telecast, airing live on ABC at 8 p.m. ET from the MGM Grand Arena in Las Vegas.

CeeLo is currently on the cusp of having his own Vegas show "Loberace" begins a run in late August, flipped the Billboard Music Awards on its head last year when he performed a medley of his hits with a piano that floated above the stage, and rotated upside down (with him attached).