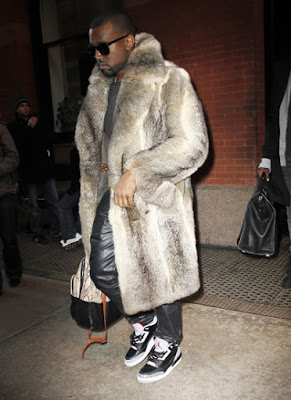 Kanye West who loves to wear fur coats got a reply from the People for the Ethical Treatment of Animals, talking about a line from his latest track, “Theraflu”. His provocative line that says, ‘Tell PETA my mink is draggin’ on the floor’ caught the institution’s attention which made Senior Vice President, Dan Matthews to release a statement.
“What’s draggin’ on the floor is Kanye’s reputation as a man with no empathy for animals or human beings,” says Matthews. “Kanye can’t help making himself look like an idiot, whether at an awards show or a fashion show,” Matthews continued and lashed into Yeezy to the UK’s Daily Mail two years back.. “He and his girlfriend look like pathetic creatures from a shabby roadside zoo”, he concluded. 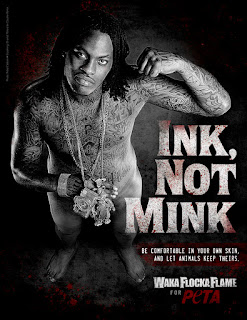 After posing twice for PETA, Wacka Flocka Flame has been invited by Unleash Magazine for an interview about his dog, Red Rose. He talked about his passion for dogs and about his current dog’s attitude.

According to Wacka Flocka Flame he had this love for dogs since he was a kid and had his Pit Bull, “I really grew up with this Pit Bull. The dog was so good he would give people 5s. The dog literally thought he was human. I just knew the dog; words couldn’t explain.”, he stated. 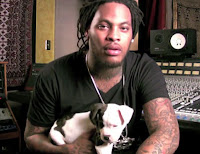 Now he has Red Rose, a dog he loves so much, and he talked about the attitude. According to him, Red Rose is bad as shit – she bites everything including his shoes and other stuff – she is hardheaded and stubborn, but he loves her. Wacka Flocka Flame don’t let Red Rose outside the house since he had a bad experience on fleas when he once let her stayed out. The dog goes with him on the road for short trips because he really wanted to make sure that she is doing right.

Wacka Flocka Flame posed for PETA twice to promote animal anti-cruelty campaign, and according to him, he did it from the heart, not for the purpose of selling more of his albums or make girls love him but he wanted to encourage everyone to give extra care and quality time for pets especially dogs, rather than treating them bad.