on January 08, 2013
Mimi Faust appeared on Atlanta's radio station V-103 to talk to host Egypt about claims from Stevie J that he had been awarded full custody of their daughter Eva. But when she showed up, she came with her new boo Nikko who is a dead ringer for Stevie J. A doppleganger of sorts.
Egypt offered Stevie a chance to call in and tell his side of the story but he tweeted, "I wouldn't ever call your show!"
So now the web is abuzz as to whether the show is amping up the drama with Mimi for ratings by hiring a look-a-like love interest. Hmmmm. Stevie J is slated to be on the Ryan Cameron Morning Show on V-103 in the morning to tell his side of the story.
See the twitter exchange that started this whole mess... 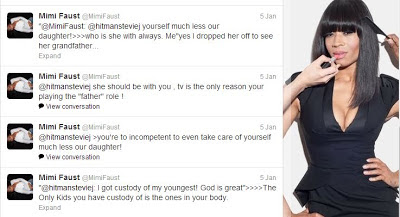 Anonymous said…
Stevie J look alike I think not. Have you seen Nikko's Instagram page? He is sexy as hell. Nothing like ugly rat face Stevie J. Check out Nikko on IG at Nikkothe1
January 15, 2013 at 9:19 PM