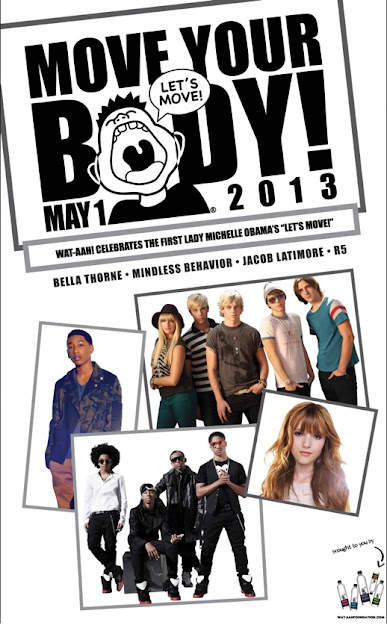 The WAT-AAH! Foundation, an organization founded by WAT-AAH!, a brand of functional bottled water for kids and teens, aimed at improving kids' health through working with youth focused creative and physical activity groups, kicks off the 3rd annual Move Your Body 2013 event in over 600 schools across the country, with key events in New York City and Los Angeles, featuring celeb performances and surprise guest appearances this Wednesday, May 1st at 1:42pm EST/10:42am PST. In NYC, the annual nationwide youth exercise school event will be hosted by pop star Bella Thorne with performances by boy band Mindless Behavior,singer Jacob Latimore and rock band R5, while in L.A teen celebs Coco Jones, Blake Michael and Jadagrace will be in attendance. Exciting 250,000 kids in over 600 schools, the event and celebs join together to support First Lady Michelle Obama 's Let's Move!

Anonymous said…
Hello there! This post couldn't be written any better! Reading through this post reminds me of my good old room mate! He always kept talking about this. I will forward this page to him. Pretty sure he will have a good read. Many thanks for sharing!

Anonymous said…
Hello there! Do you use Twitter? I'd like to follow you if that would be ok. I'm definitely enjoying your blog and look forward to new posts.

Anonymous said…
You ought to take part in a contest for one of the finest websites online.
I'm going to highly recommend this web site!

Anonymous said…
Woah! I'm really loving the template/theme of this site. It's simple, yet
effective. A lot of times it's very hard to get that "perfect balance" between user friendliness and visual appeal. I must say you've done a fantastic job with this.

Additionally, the blog loads super quick for me on Chrome.

Anonymous said…
Hi there it's me, I am also visiting this web page regularly, this web page is truly nice and the viewers are actually sharing good thoughts.

Anonymous said…
Hello to all, it's actually a good for me to go to see this web site, it contains important Information.

Anonymous said…
I am extremely inspired with your writing abilities as well
as with the layout on your weblog. Is that this
a paid topic or did you customize it your self?
Either way keep up the nice quality writing,
it's uncommon to look a nice blog like this one these days..