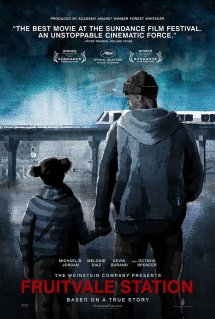 135th Street Agency screened Fruitvale Station in Atlanta last night and I got to see the story of Oscar Grant.

After spending time in the joint, Oscar (Michael B. Jordan) saw what his lifestyle of hustling was doing to his family. His mother's heart would break coming to see him in prison. His daughter thought his 'vacations' were more important than her and his girl Sophina (Melonie Diaz) was just over his hustling.Oscar decided to give up smoking trees and be a committed man to his family. But after two weeks, he had to come clean about losing his job. He couldn't fake going to work every day.

After being fired for his lateness, we see Oscar humble himself and ask for his job back. He didn't get it. He settled up with his drug link and even dumped a whole zip-lock bag of weed in the Pacific. The whole theater reacted to that as if he committed a crime. Oscar was changing his life. He had a conscience and a heart.

A defining moment in the movie, Oscar took time to show some love to a stray dog only to turn his back and the dog got run over by speeding car. It enraged Oscar and he cried. After carrying the the bloodied dog out of the street, he drove off.

When it came to his daughter Tatiana, Oscar's love was boundless. He loved his family.

It was New Years Eve and his mom's birthday (Octavia Spencer) and at his mother's urging he took the train into the city rather than drink and drive. On the train ride home with his friends and Sophina, he clashed with an old nemesis which led to an altercation with the local police. On the platform of Fruitvale Station, a trigger happy cop shot and killed Oscar Grant for no reason while a crowd of train riders recorded with camera phones.

Fruitvale Station is based off a true story. Below is the actual video of the murder of Oscar Grant which was reported by KTVU in Oakland, California.


Below is the official trailer of Fruitvale Station.