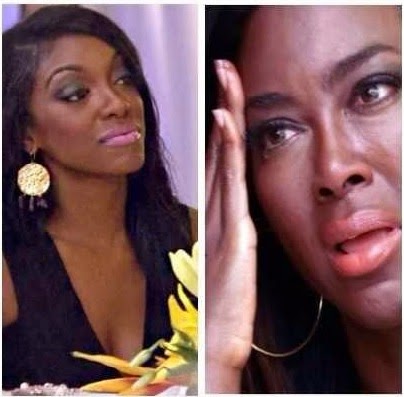 Who knew there was drama brewing there? It was clear with all the dirrespectfu shade Kenya was throwing Phaedra's way. Even Nene was done with her.

At the reunion show in New York this week, Kenya thought picking on the weakest link, Porsha would boost her appeal. Apparently she found that soft spot to set off a sleeping giant and the new Ms. Williams delivered what twitter is calling a CAN'T MISS reunion.

Rumors have Porsha dragging the Kenya Moore (or less) across the stage by her hair after teasing that Porsha's ex-husband was gay. I guess after being publicly called stupid and dumb by Wendy Williams, Porsha had already had it up to ....well there! So in twirls Kenya at the wrong/right time. Its up to you to decide how you feel about it.

Now, ordinarily I don't gossip and I'm going on record to say all of this is ALLEGED. However, I will say that I too can't wait to see this! In the meantime, go to twitter and search #RHOAReunion and enjoy!

By the way, none of the cast-mates are talking....yet. However, Nene did shoot Porsha a supportive tweet.