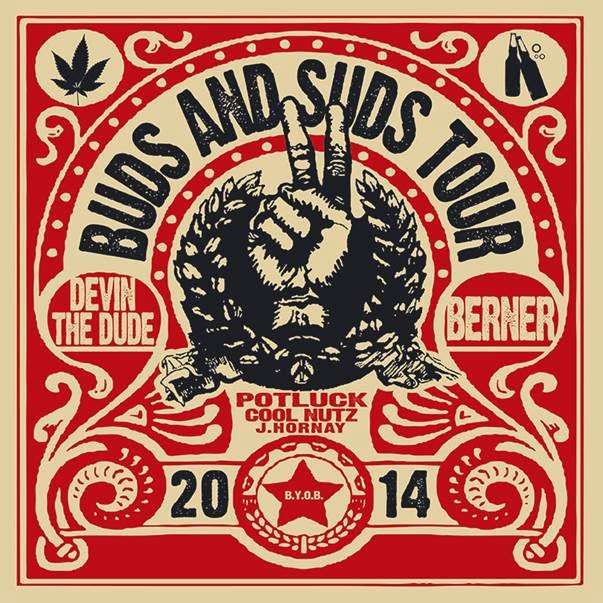 Fresh off the success of 2013's "Drugstore Cowboy," Taylor Gang is proud to announce BERNER's co-headlining "Buds And Suds Tour," with Devin The Dude.  Berner promises that the 26-city run through the U.S. and Canada will be "one BIG session!"  Berner has sold out venues on the West Coast with his signature Smoke Out series and now brings the party to the rest of the country.  The tour  kicks off in New Orleans on April 22 with openers Potluck, Cool Nutz & J. Hornay.
Boasting an impressive indie career, BERNER had released nine full-length projects through his own Bern One Entertainment imprint prior to signing with Taylor Gang. As a member of Taylor Gang,  his respect and praise from both peers and fans has only grown.  His long list of collaborators ranges from fellow Taylor Gang members Wiz Khalifa and Juicy J to rap legends like Bun B and Wyclef to youngsters like Chris Brown, and Curren$y.
BERNER's success has not been limited to the world of Hip-Hop.  He is also a rising entrepreneur whose ventures include two clothing lines, FreshKo and Cookies, and a line of hemp water simply named "H2O." The well-known Marijuana activist is also recognized as an innovator in the culture, collaborating often with mainstay brands like High Times Magazine and RAW Papers.
BERNER Bun B Chris Brown Cool Nutz Curren$y Drugstore Cowboy J. Hornay Juicy J Potluck Taylor Gang Wiz Khalifa Wyclef