on April 14, 2014
Outkast's appearance this Friday at the Coachella Music & Arts Festival was perhaps the most hyped Coachella reunion show since the Pixies played the Southern California desert festival in 2004. But you wouldn't have known that from Friday's shockingly apathetic audience, composed of mostly unappreciative, casual fans who probably only wanted to hear "Hey Ya!"
It should have been an exciting evening — this was the duo's first show in eight years (since 2006's "Idlewild" era), and it was a celebration of Outkast's 20 years in the business. And the night certainly started off strong with "B.O.B." It was a hits-packed set (other highlights included "Gasoline Dreams," "ATLiens," "Rosa Parks," "Aquemini," "GhettoMusick," "Roses," and "The Way You Move"); the chemistry and camaraderie between Andre 3000 and Big Boi was a thrill to behold; and their rapping was on point. But as the crowd's energy quickly, inexplicably faded, so did Outkast's, and the show began to lag.
Many times throughout the 90-minute concert, the duo seemed to seek validation, some sort of confirmation that spectators were actually enjoying themselves. "Are y'all alive?" Andre 3000 queried, more than once. "We just want to know one thing — are you having a good time?" Big Boi asked. These shoutouts were always met with a lukewarm response. When Big Boi's protégé Janelle Monae made a surprise appearance to sing her hit "Tightrope," she even mildly chided the audience, saying, "This is my favorite group in the whole world, and what we are witnessing is history!" — as if she were disappointed that the audience didn't share in her excitement.
Outkast's set was streamed online, and it appeared that many people watching at home were more excited about this reunion than actual Coachella attendees were. Twitter was soon teeming with outraged posts from fans watching the audience's lackluster response on the livestream. 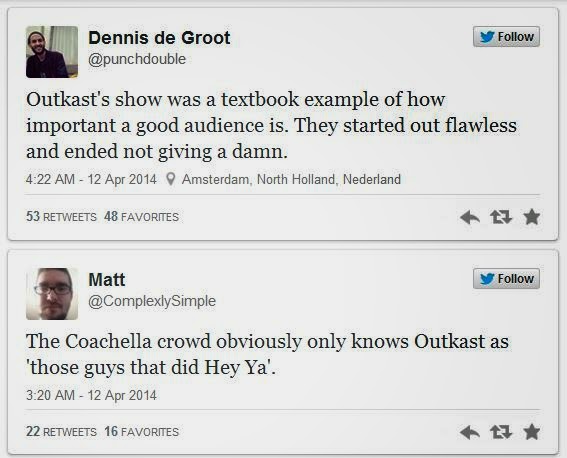 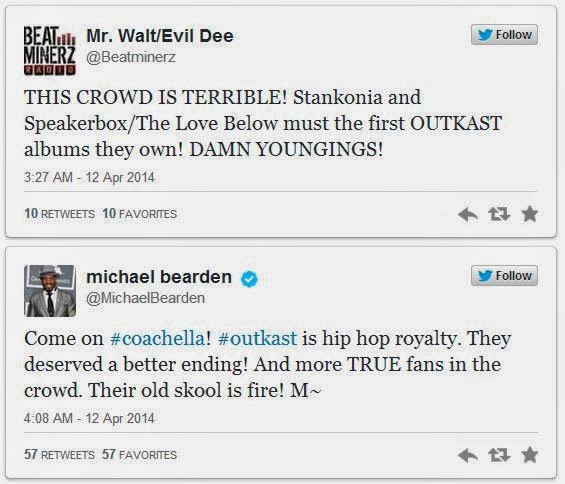 The Coachella audience perked up a bit when another young surprise guest, rapper Future, joined Outkast on "Same Damn Time" and then performed two of his own tracks, "Ain't No Way Around It" and "Benz Friends." But perhaps giving so much stage time to Future wasn't the greatest idea. Soon Coachella's 1 a.m. curfew was looming, and Outkast ended up mashing up two of their most iconic songs, "Ms. Jackson" and "So Fresh, So Clean," rather than playing them in full. "Hey Ya!" also felt rushed, and truly, there was not nearly enough shaking-like-a-Polaroid-picture taking place on the field. Andre even ended up performing some of the song with his back turned to the audience.
The show ended rather abruptly and anti-climactically, when Outkast attempted to bring out Killer Mike for "The Whole World" but the show was cut short due to the Indio area's sound curfew. "Thank you all coming out; I know it's kind of weird, 20 years later and s---. That's it. They said we can't do no more," Andre said with a shrug. "We'll see y'all next weekend," said Big Boi.
(Clip below contains profanity)
By Lyndsey Parker
Andre 3000 Big Boi Coachella Janelle Monae Outkast