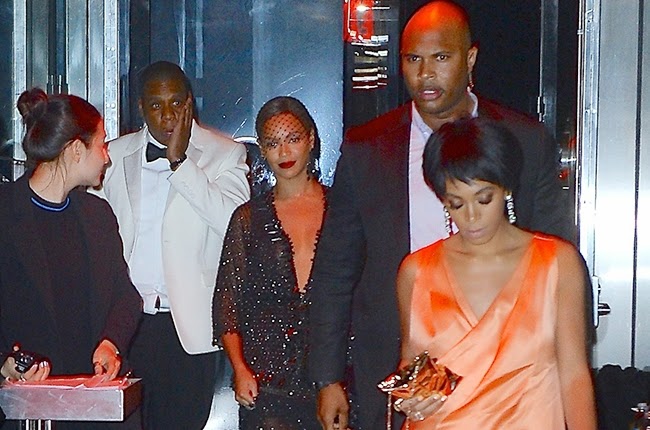 It was elevator ride seen around the world. Beyonce', Jay Z and Solange Knowles were recorded entering into an elevator at a New York City hotel just hours after the famed Met Gala. Once inside the elevator, video footage capture Solange unleashing a viscous attack on her brother-in-law Jay Z. She had to be physically subdued by the trio's personal security guard.

See the video below.


More than a week after the melee' and days after the video has gone viral. Countless jabs have been made at Jay Z for taking the beating of the year while his wife calmly stood by offering no assistance but to later stand in between the two. Now after speculation about Solange's mental stability and her sobriety that evening has been put into question, the family has finally released a statement through the Associated Press.


As a result of the public release of the elevator security footage from Monday, May 5th, there has been a great deal of speculation about what triggered the unfortunate incident. But the most important thing is that our family has worked through it. Jay and Solange each assume their share of responsibility for what has occurred. They both acknowledge their role in this private matter that has played out in the public. They both have apologized to each other and we have moved forward as a united family.
The reports of Solange being intoxicated or displaying erratic behavior throughout that evening are simply false. At the end of the day families have problems and we're no different. We love each other and above all we are family. We've put this behind us and hope everyone else will do the same.
Beyonce Jay Z Met Gala 2014 Solange Knowles