Singer Lauryn Hill comeback gets off to rocky start in London 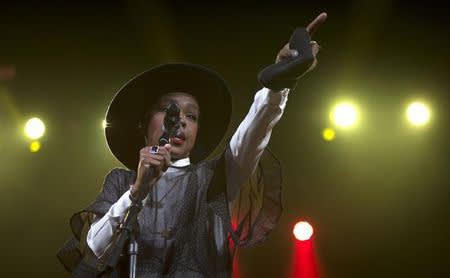 Is Lauryn Hill self-sabotaging her comeback carreer? Some think so.

By Matilda Egere-Cooper19 hours ago


Lauryn Hill's five shows in Britain this month were billed as a rare treat for fans of the elusive singer-songwriter, coming less than a year after she was released from U.S. federal prison where she served three months for tax evasion.
But a late start, angry tweets and poor reviews marred her first sell-out gig at the Brixton Academy in London.
The 39-year-old singer, famous for her 1998 album "The Miseducation of Lauryn Hill", arrived on stage with a five-piece band and three backing singers at 9:58 p.m. on Saturday.
The show, with tickets selling for 55 pounds ($90), had been advertised to start at 9 p.m., with doors opening at 7 p.m.
Management of the 4,900-seater venue took to Twitter a few minutes before her arrival to apologize to disgruntled fans, some of whom had started booing before her arrival.
"We apologize for the delay which is out of our control," read a statement on Twitter. "Lauryn Hill will be on stage very soon."
When she arrived, Hill spent 80 minutes performing a combination of re-worked hits from her debut album, the only solo studio album she has made, and delving into pop and rock territory.
Songs from "The Score", another award-winning album Hill recorded as part of the Fugees in 1996, were left largely untouched, along with a number of tracks from her 2002 MTV Unplugged 2.0 album.
Hill also performed covers of "Bang Bang (My Baby Shot Me Down)" by Nancy Sinatra, The Flamingos' "I Only Have Eyes for You" and a few Bob Marley classics, including "Soul Rebel", "Jammin’" and "Is This Love".
"DISAPPOINTING"
After the show, a number of fans took to Twitter to complain.
Yuichi Miyama, a 31-year-old paralegal from London, said on Twitter: "Lauryn Hill is the most disappointing concert I have ever been to. That's heart-breaking.”
He explained to Reuters at the concert that he didn’t recognize a lot of the songs Hill performed.
"The bottom line is Lauryn Hill is a singer and there are a lot of songs on that album that she sings certain things in such a beautiful way," he said.
"And I felt I didn't catch any of it in anything she sang. And a lot of the songs were so far away from the original."
Critics also were nonplussed by some of her song choices.
"The former Fugees star Lauryn Hill gave us bafflingly obscure reinterpretations of her best songs," James Hall wrote for The Telegraph.
The Guardian agreed. "'Ex-Factor', her soulful dissing of former Fugee and ex-lover Wyclef Jean, deserves better than to be reduced to a funk-metal workout," Ian Gittins wrote.
"When Hill does an acoustic guitar for relatively sensitive readings of MTV album songs such as 'Mr Intentional', you wish she’d apply the same courtesy to her better material."
But some fans defended the singer’s performance, saying it showed her growth as an artist.
Rukea Azougaye, a 24-year-old student from London, told Reuters: "It was beautiful. It was more than I expected because it was everything I hoped for. I’m just blown away that I got everything that I wanted from it."
Hill follows up her weekend London shows with a performance in Birmingham on September 23 before heading to Manchester on September 25. Her brief tour wraps up with two more London shows at the end of the month.
Lauryn Hill