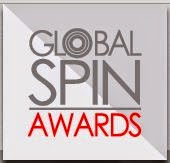 REVOLT TV will be airing The Global Spin Awards, an award show that honors the most dynamic and talented DJ's around the world on Tuesday November 24th and hosted by media and television personality LaLa Anthony.

REVOLT viewers have much to look forward to LaLa hosting the awards show. LaLa previously marked the launch of REVOLT in 2013 when the she joined Sean "Diddy" Combs on the steps of Notorious BIG's childhood home with Diddy discussing why he launched the network, which he then dedicated to the memory of Notorious BIG.