on February 17, 2019
Four-time GRAMMY® winning artist/songwriter India Arie releases her eighth studio album WORTHY (SoulBird/BMG) today, her first full-length in five years. An epic opportunity for fans to get reacquainted with the influential superstar and her new collection of uplifting songs, WORTHY resonates as a work of overlapping purpose, soaring as the iconic star's most textured and lively offering to date; an intuitive, multi-layered effort from a mature artist at the top of her creative powers. 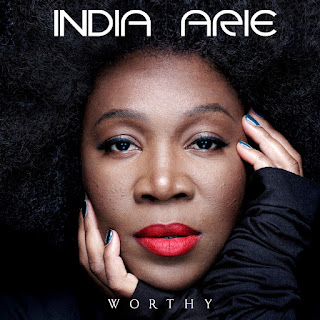 Along with the inspiring "What If" honoring iconic trailblazers including Dr. Martin Luther King and Rosa Parks, is the Caribbean-tinged "That Magic," a current Top Ten R&B hit with video featuring award-winning actor Lyriq Bent and cameo from Reggae Superstar Gramps Morgan. Other songs on the album drawing praise include "Hour Of Love," "Steady Love," "We Are," "Coulda, Shoulda, Woulda" and the title track "Worthy." India has gathered previous acclaim
med producers/collaborators for the new effort; among them are the album's executive producer Aaron Lindsey, longtime collaborators Shannon Sanders and Branden Burch, as well as new collaborator Chuck Butler.

Says India about the new album: "My favorite definition of the word 'worthy' is deserving of regard and respect. The songs on this album implicitly or explicitly carry the message and the energy of the word. I set out with the title even before I had the song, which is unusual for me, but I wanted to remind people that even though the world ordains that you have to 'do' or 'be' something to be 'worthy,' that's not true. There is nothing special we have to do or be, we all are worthy once we arrive at that realization. A person who feels empowered in that way is a much more powerful force in this world."

After more than 10 million albums sold and 10 world tours, including with icon Stevie Wonder, India.Arie is recognized as a global difference maker. She has been embraced by a new generation of artists such as Janelle Monáe and Ariana Grande, amplifying the resilient singer/songwriter's signature themes of personal and spiritual growth, and self-knowledge. Her willingness early on to challenge preconceived notions of beauty and sexuality coupled with her courage to defy broad racial and gender categorizations have helped empower current culturally-conscious movements.
India Arie Worthy