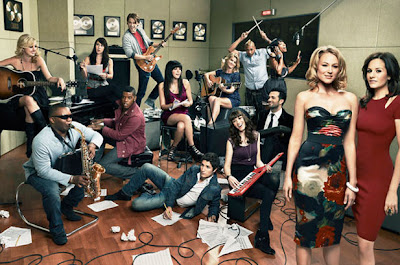 NBC Universal's Bravo cable network has found its success in competition shows by making stars out of the magic-makers behind the curtain. Chefs whose names still appear in small print on menus, fashion designers without a personal label and hair stylists will soon be joined by yet another group of creatives working behind the scenes: songwriters.

"Platinum Hit," a 10-episode songwriting competition that premieres May 30, assembles 12 unknown songwriters competing to win a music publishing deal with Sony/ATV, BMI's The Writing Camp and a recording deal with Sony's Jive/RCA label. The competitors have backgrounds in multiple genres-country, pop, R&B, hip-hop-and "Platinum Hit" forces them to work in areas foreign to their experience.

"We relish the creative process," says Shari Levins, the show's senior VP of production at Bravo. "This felt very much [like] our signature shows-we're not afraid to show people being as different as they are, and the judges are great and credible." Singer/songwriter Jewel serves as host and a judge, and former "American Idol" judge Kara DioGuardi heads a rotating panel of established artists that includes Leona Lewis, Natasha Bedingfield, Donna Summer, Jermaine Dupri and Taio Cruz. RCA/Jive Label Group senior VP of A&R Keith Naftaly is a recurring judge.

In each episode, contestants are given a songwriting task. The judges select a few winners and then create teams to finish and then perform the song. In the premiere, the challenge is to write a chorus about Los Angeles in a half hour, from which four hooks are selected and teams of three complete the tune. "Collaborations are essential to the show," Jewel says. "It's a battle of ideas to a complete song. The awkward moments that [arise during the collaborative process] are essential to making it watchable."

Jewel and DioGuardi say the real-life nature of the tasks were the reasons they were attracted to the show. Both describe the life of being a collaborator in very specific terms-meeting your new partner at 11 a.m. and finishing a song before lunch and a few more by quitting time-and say the show serves as a wake-up call for contestants.

"The songwriters we have use more inspiration than craft," says DioGuardi, a co-writer on Ashlee Simpson's "Pieces of Me" and Christina Aguilera's "Ain't No Other Man," who is currently working with a number of country artists.

In the premiere, contestants' eyes roll when one of them semi-melodically shouts "love it or hate it" with little sense of craft or emotion. But to DioGuardi, the catchphrase was much more of a winner than any of the other earnest melodies reminiscent of Billy Joel, Elton John or modern country.

"The concepts are the big thing-a genius title that expresses an idea or emotion that you would not ordinarily say," DioGuardi says, mentioning Katy Perry's "E.T." and Ke$ha's "Blow" as examples. She adds that one song that came out of the collaborations was strong enough to be considered for pop singer Charice's second full-length album. But it didn't make the cut.

Like all competition shows, "Platinum Hit" will dismiss contestants, but the premiere supplied by Bravo didn't include the final scene, and Jewel was hesitant to share the show's goodbye line. But she did hint that it might go something like this: "Songwriting is a hit or a miss. That was a miss."

article and image courtesy of Billboard.com