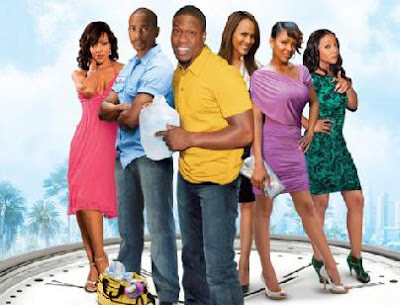 It looks like syndicated radio host-turned-filmmaker Russ Parr has a lot of friends, especially radio listeners in DC.

“35 & Ticking” has generated approximately $53,000 in box office grosses in its first 12-day run on six screens in Atlanta, DC and Baltimore.

Image Entertainment will capitalize on Parr’s popularity and its solid numbers, and extend the theatrical engagements of “35 & Ticking,” in its limited markets; plus expand to other cities where movie-goers are familiar with the Russ Parr brand.

After all, Parr is a top-rated, nationally-syndicated radio host heard weekdays by 3.2 million listeners in 45 cities across America. Next up: “35 & Ticking” will debut at the AMC Washington Square 12 theatre in Indianapolis, Ind. on June 10.

For its opening weekend on May 20th, “35 & Ticking” reported grosses of $30,000 with a $5,000 per average — the third highest opening among new releases behind “Pirates of the Caribbean: On Stranger Tides” and Woody Allen’s “Midnight in Paris.” The Magic Johnson theatre – that is, the Magic Johnson Capital Center 12 – in Largo, Maryland (a suburb of DC) alone pulled in $10,000. It’s not surprising Parr had a strong showing in DC, since it’s the home of his top-rated syndicated morning radio show. Still, to thank listeners for showing their support, Parr visited theatres, meeting and greeting fans and buying popcorn and soda for everyone.

“Although the subtext of this film centers around the important theme of building a lasting relationship, Parr’s team doesn’t ridicule or belittle the subject, but instead have delivered a final product with the right balance of drama and humor.”

To view the trailer, visit http://www.youtube.com/watch?v=rr7bx2Z6oj4

About Russ Parr
A true Renaissance man, Russ Parr’s career has evolved from a stand-up comic and recording artist to a top-rated, nationally-syndicated radio host heard weekdays by 3.2 million listeners in 45 cities across America. And he’s an independent filmmaker too. With Up to Parr Productions in conjunction with Swirl Films, Parr has written, produced and directed three films – that is, “The Last Stand,” “Something Like a Business,” and “Love For Sale.” Currently, all titles are available on DVD.