Photo provided by ALLHIPHOP.COM
(AllHipHop News) A man has admitted to being involved in the shooting rap star Tupac Shakur in 1994 after allegedly being paid $2,500 dollars by James "Jimmy Henchman" Rosemond inside Manhattan's Quad Studios in November of 1994.

Dexter Isaac, a former friend of Rosemond, is an inmate currently serving life in prison for murder, robbery and other offenses.

Isaac came forward Wednesday (June 15th) with the information on the eve of what would be Tupac's 40th birthday.

He confessed to his involvement in the November 30th, 1994 shooting of Tupac Shakur to AllHipHop.com, after Jimmy Henchman identified him in a statement, relating to Henchman's indictment for dealing numerous kilos of cocaine. 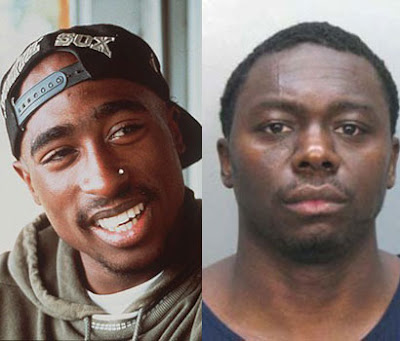 Photo courtesy of XXL Magazine
left: Tupac Shakur
right: Dexter Issac
"I want to apologize to his family [Tupac Shakur] and for the mistake I did for that sucker [Jimmy Henchman]," Dexter Isaac told AllHipHop.com from prison. "I am trying to clean it up to give [Tupac and Biggie's] mothers some closure."

Henchman, who is currently on the run from Federal officials, claimed that Dexter Isaac, along with other incarcerated inmates were cooperating with the government in an investigation of his alleged drug dealing activities.

"If the government is relying on informants like Winston “Winnie” Harris, a convicted drug dealer and Jamaican deportee, who came to me and motioned via hand signal that he was forced to wear a wire and begged me to skip town or Dexter Isaac who is serving life in prison plus 30 years, then I’m sure I will not be offered a fair trial," Henchman said in a statement released to AllHipHop.com in May of 2011.

Dexter Isaac told AllHipHop.com that he decided to confess to the robbery to prove Jimmy Henchman's involvement, in addition to clearing his conscious for his role in the shooting.

Isaac said he was comfortable going on record relating to the robbery and shooting, since the statute of limitations had expired.

Legally, no one can be prosecuted for the assault at this time.

Isaac was a lifelong friend of Jimmy Henchmen, who helped the former mogul set up his first company, Henchman Entertainment, in 1989.

Isaac claims he never cooperated with the government in any investigation, and Jimmy Henchman's allegations infuriated him.

Isaac, who is also from Brooklyn, has long been suspected of being involved in the Quad shooting of Tupac Shakur, along with an associate name Spencer "Scooter" Bowens, who is also serving a life sentence.

According to the confession below, Dexter Isaac not only knows what happened to Tupac Shakur's jewelry, but he claims he is also in possession of the Hip-Hop star's chain that was taken during the altercation on that infamous night on November 7, 1994.

The shooting on November 30th, was the start of a deadly feud that resulted in the murders of both Tupac Shakur and Notorious B.I.G.

Their murders have never been solved.

Isaac was indicted by the government in 1998 and was subsequently sentenced to life in prison for murder, robbery, fraud and witness intimidation charges.

CLICK HERE: His entire admission involving his role in the Tupac Shakur shooting in 1994 is listed below, along with his contact information for verification purposes.]