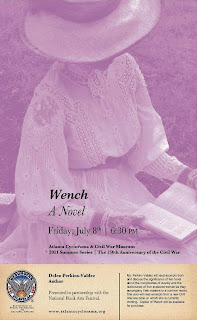 Harvard University graduate, and published fiction writer and essayist visits Atlanta on Friday, July 8 at 6:30P.M. with the reading of her first novel WENCH, one of the programs presented in conjunction with The Atlanta Cyclorama & Civil War Museum’s inaugural four-year-long American Civil War Program Series “The American Civil War: One-Hundred-Fifty Years Later”. Presented in partnership with the National Black Arts Festival, Perkins-Valdez’s debut novel plunges into a dark period of American history, chronicling the lives of four slave women—Lizzie, Reenie, Sweet and Mawu—who are their masters' mistresses, and vividly explores the complicated psychological dynamic between master and slave. The characters endure heart-wrenching decisions, emotional turmoil, and walk a fine line of favor with their masters. Admission is $10.00 will be held in Historic Grant Park on the campus of The Atlanta Cyclorama & Civil War Museum (located next to The Atlanta Zoo) at 800 Cherokee Avenue SE Atlanta, GA 30315.