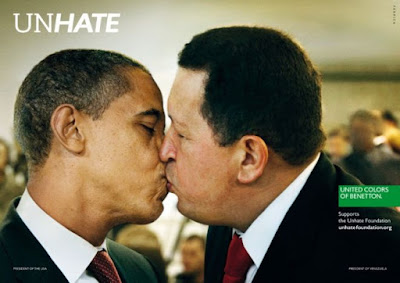 Yes, that is President Obama sharing a tender moment with Venezuela’s President Hugo Chavez for The United Colors of Benetton’s new ad campaign.

The Italian fashion brand, already known for its provocative ads throughout the years, is already making headlines for its latest effort – an ad campaign showing photoshopped images of world leaders kissing their biggest rivals on the lips. The company’s new Unhate campaign also includes the modified images of President Obama planting one on the president of China, as well as Israeli leader Benjamin Netanyahu smooching Palestinian National Authority, president Mahmoud Abbas, among others. 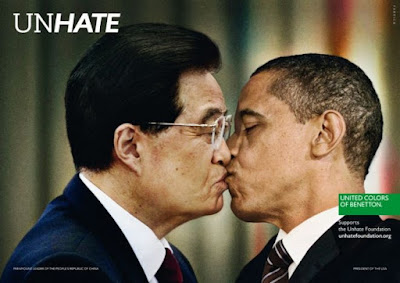 China and the US

“We want to reaffirm the value of the brand. We are going back to the tradition of [Benetton] and will make the most of this. But we are reconciling the past with the future. At this time, when something bad is happening in the world, we want to focus people’s eyes on the positives. This campaign is about reconciliation and acceptance,” the head of the company and son of the founder, Alessandro Benetton, told The Independent newspaper.

Benetton created the Unhate Foundation as a way to contribute to the creation of a new culture of tolerance, to combat hatred and build on Benetton’s underpinning values, according to the Unhate Foundation’s website. Besides making world leaders make out, the foundation also has set up a “kiss wall” on Facebook that lets people upload their own kiss photos.

While some people are taking the campaign as a good joke, the Vatican and some newspapers are not so forgiving. The images have already been banned by The Sunday Times, International Herald Tribune and The Guardian. 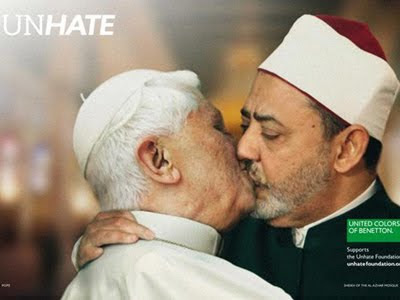 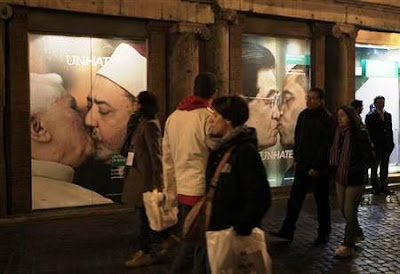 The Pope and an Imam

People stroll in front of the Benetton store in downtown Rome Nov. 16, 2011.

On Wednesday Benetton pulled the ad of Pope Benedict XVI smacking lips with Sheikh Ahmed Mohamed El-Tayeb, imam of the al-Azhar Mosque in Cairo. Vatican spokesman, the Rev. Federico Lombardi, called the ad an “unacceptable” manipulation of the pope’s likeness that offended the religious sentiments of the faithful.

“It shows a serious lack of respect for the pope,” the Vatican spokesman said.

It wasn’t clear if the ads had been published anywhere; on Wednesday images from the campaign were unfurled briefly in Milan, New York, Paris, Tel Aviv and Rome but were quickly taken away. 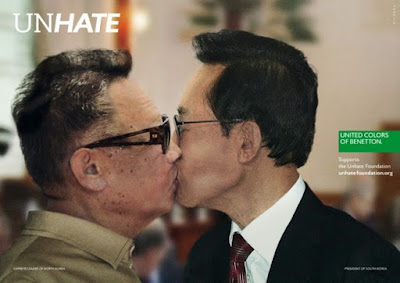 Benetton said the photos of political and religious leaders kissing were “symbolic images of reconciliation — with a touch of ironic hope and constructive provocation — to stimulate reflection on how politics, faith and ideas, when they are divergent and mutually opposed, must still lead to dialogue and mediation.”

In a statement, the Treviso, Italy-based clothing manufacturer said it was sorry that its image had offended the faithful and that as a result “we have decided with immediate effect to withdraw this image from every publication.” 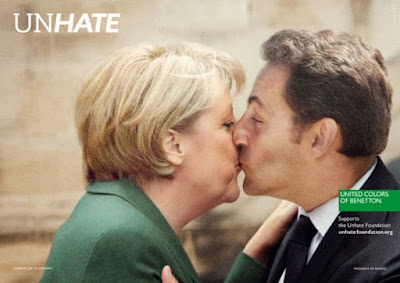 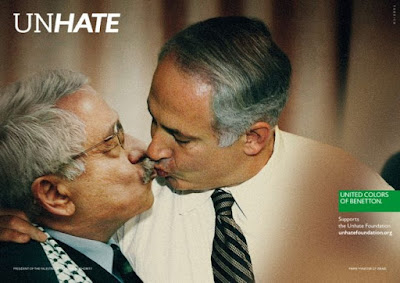