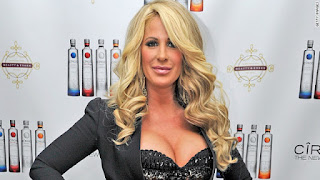 I guess springtime brings out mommy-to-be's everywhere. We're happy to announce that Real Housewife of Atlanta Kim Zolciak joins the crowd of happy parents announcing their impending arrivals, revealing that she and husband Kroy Biermann are expecting their second child.

The couple, who tied the knot last November, welcomed their first child together, son Kroy Jagger (KJ) Biermann, on May 31, 2011.

Kim is about four months along, and she's eagerly anticipating what will be her fourth child. The 33-year-old also has two daughters, Brielle, 15, and Ariana, 9, from a previous marriage.

"Kroy and I are so excited," Zolciak tells Life & Style. "To decide we wanted to get pregnant again and have it happen so quickly was such a blessing...I'm so excited that KJ will have a little buddy."

Zolciak also tweeted the news, thanking her two daughters and the couple's friends for keeping it under wraps until she and Biermann, 26, were ready to share.

"Thank you for all the Congrats! We feel so blessed!," Zolciak tweeted Tuesday.

In the meantime, the busy mom - who has also tweeted about having a baby clothing line in the works - is gearing up for the premiere of her Bravo show focused on her 2011 nuptials, "Don't Be Tardy for the Wedding," which debuts April 26 at 9 p.m. ET.