Bitch Jacked My Style...but who rocked it? 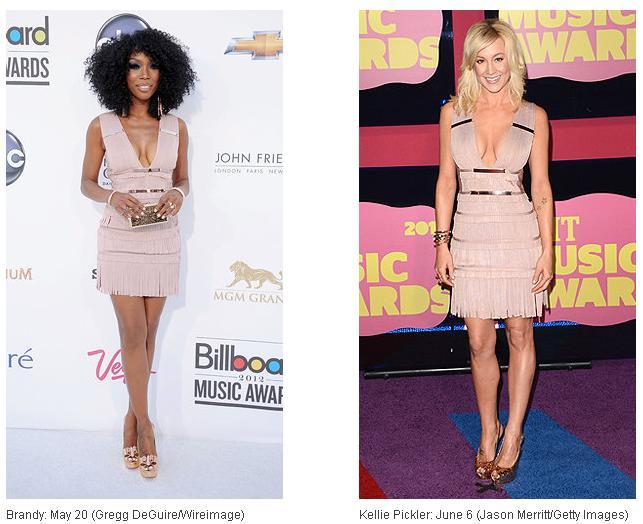 Brandy and Kellie Pickler both stepped out in the same dress only two weeks apart. Both celebutantes chose a pale-pink Herve Leger by Max Azria design with fringe and metal detailing. This flirty display of legs can be yours for the low low price (LOL) of just $2,600!

Brandy, 33, debuted the dress at the 2012 Billboard Music Awards at MGM Grand in Las Vegas on May 20. The "Brandy & Ray J" star, who released the single "Put it Down" with Chris Brown last month, accessorized with Christian Louboutin slingbacks, lots of jewelry, and a mini clutch. Her hair, which she normally wears straight, was curly and loose.

Kellie, 25, strutted her stuff in the frock at the 2012 CMT Music Awards at Bridgestone Arena in Nashville on June 6. She paired the piece with platform shoes by Giuseppe Zanotti and gold bangles, and wore her wavy hair down .

So, who rocked? Weigh in ya'll!