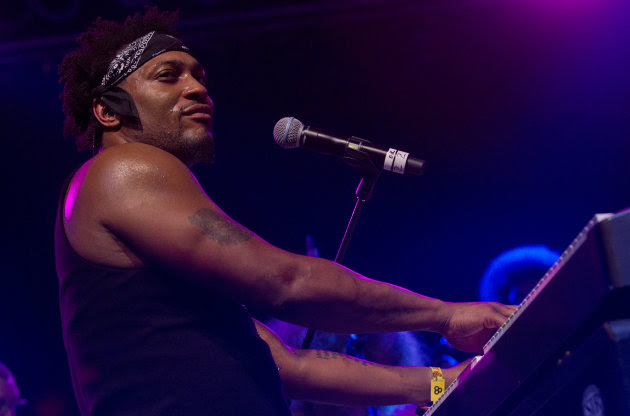 "I've been waiting 12 years to say this — ladies and gentlemen, D'Angelo!," Thompson said as the crowd roared.

It was his first U.S. show since 2000 and a prelude to an appearance at July's Essence Music Festival and a European tour with many of the same players who backed him Sunday morning. D'Angelo played live in Europe earlier this year.

D'Angelo and his all-star band powered through a 90-minute jam session Sunday morning that included Jimi Hendrix's "Have You Ever Been to Electric Ladyland," Parliament Funkadelic's "Funky Dollar Bill," Led Zeppelin's "What Is and What Should Never Be" and The Beatles' "She Came in Through the Bathroom Window," but no new music. 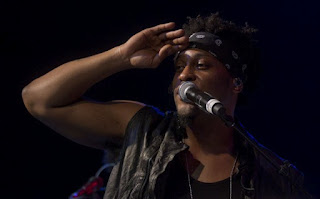 D'Angelo worked from lyric sheets and the band put together a six-hour practice session Saturday before The Roots, Thompson's regular band, played a gig on Bonnaroo's biggest stage.

When the crowd chanted "One more song! One more song!" after the set, Thompson told fans they hadn't learned any others to play.

Asked if he would be interested in an interview after the show, D'Angelo said "not yet." His only recent public comments were made in a GQ article last month.

Dressed in a black tank top and jeans with a black and white bandanna wrapped around his dreadlocks, D'Angelo was visibly reserved at the start of the set. But he warmed up, kicking into high gear during the Zeppelin portion of the show.

Switching between keyboards and his guitar, D'Angelo's only verbal interaction with the crowd came near the end of the night when he shouted: "Do y'all want us to go home yet?"

Thompson, sipping a cup of orange juice, was still fired up after the show.

"Man, I want to go to Disneyland, right?" he said. "I've been dreaming about this."

Thompson said he had an ulterior motive for luring his friend to Manchester. He wanted to prove D'Angelo was still in fighting shape.

"I wanted him to see that," he said. "That's a green light. Me doing it wasn't, like, running out of jam partners. Me doing it was basically showing him, 'Look, you are so missed you don't even realize how much you are missed,' hoping that this will be the adrenaline boost that will finally get him to turn his record into the label. It's done, it's brilliant. I played on it. I know it's brilliant. Now it's just time to let his kids go and show it to the world. That's what I'm here for."