The Houstons On Our Own – Sneak Peak for Tomorrow’s Episode 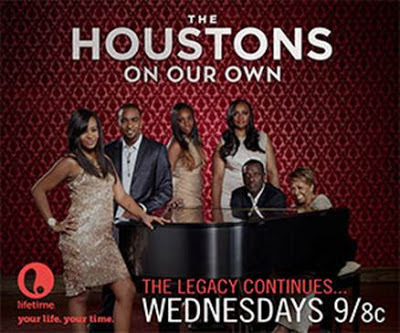 Tomorrow nights episodes will feature Th Houston Family’s spiritual mother Tony Luck counseling Bobbi Kristina on dealing with grief and finding a place of happiness to deflect her current issues. Cissy Houston pays a visit in an attempts to address Bobbi Kristina’s avoidant behavior towards the matriarch.  The journey of this family continues as we see the issues being confronted head on and the beginning of solutions start to manifest.  Lastly, we will see Bobbi Kristina finally explore her acting craft by taking in acting classes.
Lifetime’s all-new docuseries "The Houstons: On Our Own", every Wednesday at 9pm ET/PT with back-to-back episodes, chronicles those closest to the pop music icon, including her daughter Bobbi Kristina (Krissy); Pat Houston, Whitney's sister-in-law and manager; Pat's daughter Rayah; Whitney's brother Gary; mother, Grammy® Award-winning singer Cissy Houston, and family friend Nick Gordon, as they try and pick up the pieces after her untimely death.
Throughout the 14 episode half-hour series, viewers are seeing the Houston Family as they come together to deal with the loss of Whitney and focus on Krissy, the 19 year-old daughter of Bobby Brown and Whitney, and the only heir to her mother's estate.  This is truly a journey through the emotional spaces of a family that has been public for so many years.
To see the video of the sneak peak, click here.