Pepsi Loves Beyonce So Much They Put Her on the Can 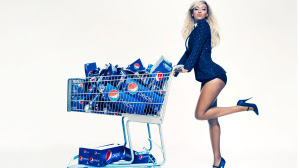 Beyoncé is coming to a supermarket near you, thanks to a multi-million dollar deal with Pepsi.

Bey first served as a Pepsi spokesperson in 2002, and they've circled back for another sccessful do-over. She'll not only star in a new “Live For Now” TV spot–her fifth commercial with the soda company premiers after this year’s Super Bowl, where she is headlining the halftime show–but cardboard cutouts of Bey will be featured in supermarkets all around the world. I think stores may want to nail these down to prevent theft.
If you've ever dreamt of what it would be like to kiss the super star, get this...Beyoncé’s image will also be featured on a limited edition can that will premier in Europe in March 2013. This is as close as your lips will get. Take it. This is a limited time only promotion.
Let's have a little glimpse of Bey's history with Pepsi:

Anonymous said…
I truly love your site.. Excellent colors & theme.
Did you build this web site yourself? Please reply back
as I'm planning to create my own personal website and want to learn where you got this from or what the theme is named. Many thanks!
Here is my web-site ... nfl jerseys
December 12, 2012 at 10:06 PM