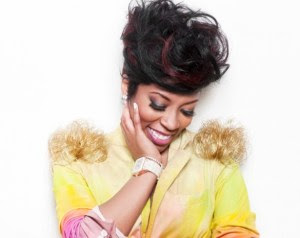 After a record-breaking first season of Love & Hip Hop Atlanta, breakout reality star K. Michelle is getting a second chance to make a first impression. A record label finally decided K. Michelle is worthy enough to have a music home and many of had not heard of her when she had a deal the first time will get a chance now that she's signed with Warner Bros Music.

“I’m just really blessed to get a second chance. I have so much to sing about and so many stories to tell.”
When it comes to those stories, the singer has very clear ideas of what she doesn’t want to do with her debut album. “I don’t want to be crying, ‘Oh my God I’m hurt.’ We know I’m hurt, we all get hurt,” she said. “It has to say it in a way that women won’t say it…because I don’t care, I’m going to say what needs to be said.”


In 2008 K. Michelle was released from JIVE, pending word about her ex boo stealing from her. Not to mention he allegedly beat her. That he is former flame MeMpHiTz who is currently married to Lil Wayne's ex-wife LaToya Carter.

Since being dropped from JIVE, K. Michlle has been struggling to get the dream once stolen from her. I'd say with her massive noteriety from LHH, she's off to an amazing start.

Now if we can only get Rasheeda and Joseline a record deal.