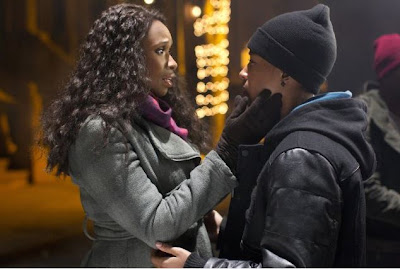 What do Jennifer Hudson, Langston Hughes, and Nas all have in common?
They’re all visiting for Christmas this season in the movie, Black Nativity. Based on Hughes’ 1961 “gospel-song play” about the birth of Jesus, writer-director Kasi Lemmons (Talk to Me) gives the story a contemporary spin and setting by exploring the coming-of-age pains of Langston (Jacob Latimore), who’s sent from Baltimore by his struggling mother (Hudson) to live with his grandparents (Forest Whitaker and Angela Bassett) in Harlem.

Langston is a street-smart kid who knows little to nothing about his grandparents and has never been apart from his mom. Economic hardship results in Langston and his mom being evicted from their home, so he journeys to New York City to spend the holidays with his estranged grandparents.
The film’s all-black primary cast includes Oscar-winner Forest Whitaker (The Butler), Angela Bassett (Olympus Has Fallen), Tyrese Gibson (Fast & Furious 6), Mary J. Blige (Rock of Ages) and Oscar-winner Jennifer Hudson (Dreamgirls).
Watch the trailer below.
Angela Bassett Black Nativity Forest Whitaker Jacob Latimore Jennifer Hudson Kasi Lemmons Langston Hughes Mary J. Blige Nas Tyrese