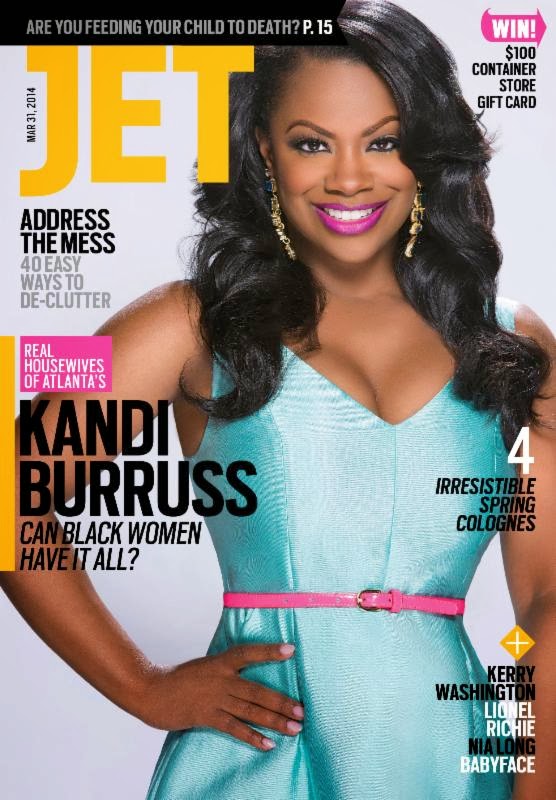 Quadruple threat, Kandi Burruss, works bombshell swag on the cover of JET magazine as she opens up about her career and her very public relationship with her mother, "Mama Joyce," and fiancé, Todd Tucker.

"When I speak about anything on camera I want to accomplish it before we finish taping," Burruss tells JET regarding her drive and ambition.  "I am a 'do what I say' person.  I want people to know I'm not a [phony].  I hate when people on reality shows mention how they want to do this and that, but you never hear of it again," she added.

With a successful adult toy line, Bedroom Kandi, her Atlanta-based studio, The Kandi Factory, and her musical, A Mother's Love, set for DVD release in April, Burruss certainly has proven that she has a keen sense for business.  She admits her relationship with Tucker has helped her sharpen her skills.

"I love that Todd is affectionate and relationship-oriented," said Burruss.  "But he's also a leader and a planner, and because of his production background he makes me a better businesswoman."

Although many know that Burruss' mother, Joyce Jones, is firmly against the union of her daughter with Tucker, she concedes exclusively to JET that "If they are married and it lasts, I will be the first to apologize."

"When my mother was younger it was all about getting a man to be a provider," said Burruss addressing her mother's qualms.  "She leans toward a man who is financially more well-off than the dude who is just a good guy."  She added, "I've dated guys who are more successful than me, and my mom is like, no matter what he does wrong, you have to work it out."
Bedroom Kandi JET Jet Magazine Kandi Burrus Mama Joyce RHOA Todd Tucker