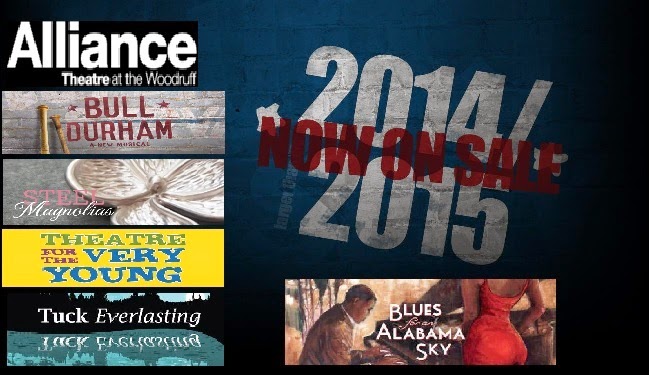 “The 2014/15 season is full of people, stories and human moments that are simply larger than life,” said Susan V. Booth, Jennings Hertz Artistic Director.  “Because life lived large takes you all over the emotional map, we’ve got a season that does the same, spanning passion, epiphany, history, humor and mortality.”

The 2014/15 Alliance Stage season will begin on September 3, 2014, with BULL DURHAM, the story of three lives brought together by America’s two favorite pastimes – baseball and romance.  Based on the popular 1988 film which Sports Illustrated called the “#1 Greatest Sports Movie of All-Time,” BULL DURHAM has a book by Academy Award-nominee Ron Shelton (director and screenwriter of the BULL DURHAM movie) and music and lyrics by folk musician Susan Werner, whom the Chicago Tribune called, “one of the most innovative songwriters working today.”

Also on the Alliance Stage this season is STEEL MAGNOLIAS, the celebrated Southern classic of family and friendship.  STEEL MAGNOLIAS will be directed by legendary two-time Tony Award® winner Judith Ivey (Steaming, Hurlyburly), perhaps best known for her role on the popular CBS series Designing Women.

In January 2015, the Alliance will produce the world premiere musical TUCK EVERLASTING, based on the beloved, best-selling, award-winning novel by Natalie Babbitt.  TUCK EVERLASTING will be brought to life on stage in a wholly original production, directed and choreographed by Tony Award® winner Casey Nicholaw (The Book of Mormon, The Drowsy Chaperone, Spamalot), featuring a book by Tony Award® nominee Claudia Shear (Dirty Blonde) and music and lyrics by Chris Miller and Nathan Tysen(The Burnt Part Boys).

The Alliance Stage season will close with BLUES FOR AN ALABAMA SKY by beloved Atlanta author and playwright Pearl Cleage(What I Learned in Paris, The Nacirema Society Requests…).   The drama is a timeless look at hopeful dreams during the twilight of the Harlem Renaissance and is a celebration of its world premiere on our stage 20 years ago.

The 2014/15 Hertz Stage season will include three world premieres and a partnership production with Atlanta’s favorite improv company, Dad’s Garage.  The Hertz season will open on September 26 with the World Premiere of NATIVE GUARD, a staging of U.S. Poet Laureate Natasha Trethewey’s Pulitzer Prize winning collection of poems by the same name.  NATIVE GUARD juxtaposes the deeply personal experiences of Trethewey, a child of a then illegal marriage between her black mother and white father living in 1960s Mississippi, with the experience of a soldier in the Native Guard, the first African-American Union troop in the Civil War who was charged with guarding white Confederate captives.  The Alliance’s production of NATIVE GUARD is part of the National Civil War Project, an initiative between theatres and universities across the country to create new theatrical works commemorating the 100th anniversary of the American Civil War.

Also on the Hertz will be IT’S A WONDERFUL LAUGH, a holiday production by Dad’s Garage where the audience will choose a pop culture figure to “invade” the telling of the Christmas classic It’s a Wonderful Life, as well as the world premiere of EDWARD FOOTE, a Southern Gothic mystery told against the backdrop of folk-songs and haunting shape note singing.  EDWARD FOOTE is written by Phillip DePoy, a pillar of the Atlanta theatre community with a long tenure directing University theatre programs.

The Alliance is pleased to announce the winner of the 2015 Alliance/Kendeda National Graduate Playwriting Competition, THE C.A. LYONS PROJECT, by Tsehaye Geralyn Hébert.  When title character Lyons can no longer hide his sexuality or illness, his fledgling dance company is threatened, and the women who love him must come together to decide the best way to carry on his legacy.  Hébert is currently working towards a MFA in Writing from The School of the Art Institute of Chicago (SAIC).  In addition to the full production the play will receive, Hébert and four other competition finalists will be given development and networking opportunities.

“The way the Atlanta community embraced the many plays and projects during the 10th Anniversary of the Alliance/Kendeda Competition has given it such momentum for its next ten years,” said Alliance Theatre Director of New Projects Celise Kalke.  “THE C.A. LYONS PROJECT is the most multidisciplinary show to come through the competition and is so ambitious in its scope.  It’s a great piece to kick off the Alliance/Kendeda National Graduate Playwriting Competition’s next decade!”

The 2014/15 Youth and Families season includes three family productions – COURAGE, a new production created for middle school audiences based on The Red Badge of Courage and conversations with Atlanta middle school students, JAMES AND THE GIANT PEACH, a musical based on the popular book, as well as the 25th Alliance production of the Dickens classic A CHRISTMAS CAROL.

“The 46th season is one that travels far and wide – both in settings and stories – but also in its reach into our hopes, our fears, and our ever expanding notions of life’s limits,” said Booth.  “We’ve always believed that the discoveries of theatre lead to discoveries of self.  In 2014/15, we’re hoping you discover something more.  Something bigger.  Something larger than life.”