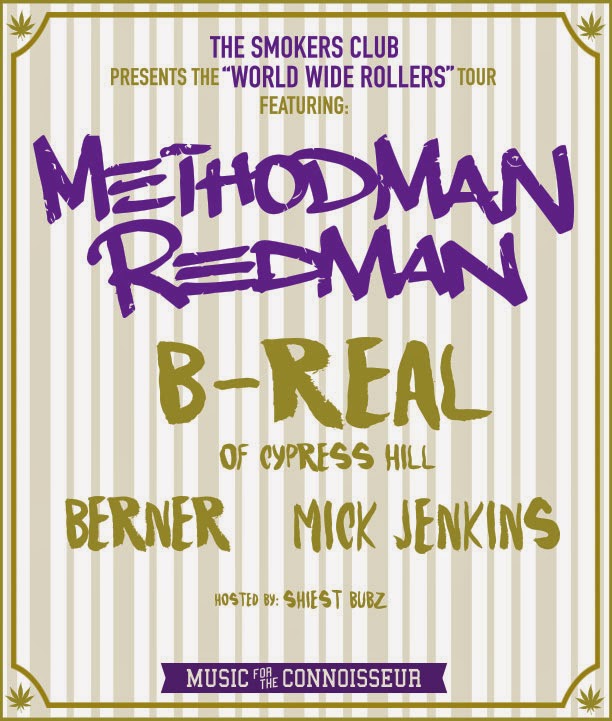 The Smoker's Club has just announced their line-up and dates for their 5th annual tour kicking off October 14 in Providence, RI at Lupo's Heartbreak Hotel. The world's largest hot-box will be headlined by multi-platinum recording artists METHOD MAN & REDMAN with a supporting cast of B-REAL (from the Grammy nominated Cypress Hill), Taylor Gang's BERNER, and new Cinematic artist MICK JENKINS. The 37-city US Tour will wrap up November 26th at New York City's Best Buy Theater. Tickets go on-sale Friday, August 15th at 10am EST.

Launched by Cinematic Music Group, The Smoker's Club Tour has flourished into one of the most successful independent concert tours in the world. With polarizing artists, shows that turn into parties, and their popular YouTube Channel that showcases the hilarity of it all, it's no wonder The Smoker's Club Tour shows no sign of slowing down.

Method Man and Redman's energy and reputation for humor have made them larger than life personalities. They are one of the most legendary duos in Hip-hop and this year marks their 20th Anniversary together.

"Method Man and Redman have been staples in my playlists since I can remember. I have probably smoked 5 lbs of weed listening to their music & watching "How High" on repeat during my life, LOL. It was a no brainer & honor to have them headline this year's tour," says Smoker's Club founder Jonny Shipes.
The Smoker's Club Tour will also feature: B-Real, Berner, and Mick Jenkins. The tour is booked annually by The Agency Group.  Go to www.thesmokersclub.com/tour to buy tickets
B-Real BERNER Cinematic Music Group Cypress Hill Method Man Mick Jenkins Redman Smoker's Club