Like a bad dream, you go looking for help after wrecking your car, can't get any cell reception and you walk into a mental asylum only to be admitted against your will. Or is it? 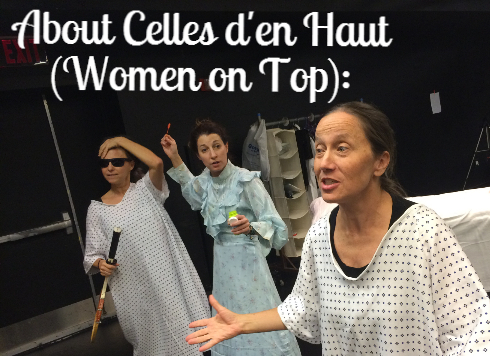 Celles D’en Haut (Women on Top), is a play offered both in English and French (make note when you plan to go see) and is intended to be a celebratory homage to women and the dynamics of their relationships with each other and the world around them. But what you really get is hilarity and freedom to commune as women against a world who thinks we should be one way or another.

Our assumed victim is Violet for whom I was completely sympathetic as we hopelessly witnessed her attempt to convince a high-heel wearing male physician assistant that she just needed 'help'. Of course you do!

On an isolated mountain in the middle of nowhere, this mental retreat of sorts hosts women who are detached from reality, suffering love gone wrong, overworked, unloved and on the upper floors the sounds of deep unrelenting pain. Much of the mental detachment is self inflicted, some inherited and much brought on by circumstance.

It dawned on me during this play that many societal woes were noted. The doctor is promised but never (or rarely) comes. The food is plentiful and it seems the women get to eat whatever they want whenever they please (no judgement zone) and though they eat and eat with no judgement, Celles D'en Haut doesn't let us forget the symbolic pig we've become by background pig grunting sounds and pig-faced masks worn. Still, this asylum is more like a place no one wants to leave.

From a production standpoint, minimal cast and set worked best.

Have a drink...or two and go see Celles D'en Haut with girlfriends. It'll hit you midway through (the alcohol and the gist of the play) and it'll all make much more sense. If not, see it again.