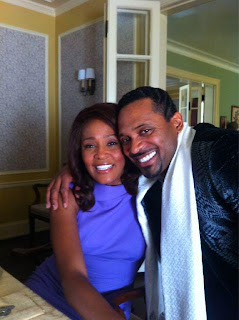 ...an unlikely pair to say the least

Mike Epps was on Facebook this morning sharing a photo of himself and Whitney Houston. He says, "Me and the QUEEN OF MUSIC WHITNEY HOUSTON ON THE SET OF SPARKLE!!"

Whitney Houston, Jordan Sparks and Mike Epps are some of the celebrities working on the 1976 remake of Sparkle. Jordan will be carrying the load of Sparkle, Houston will play the role of the mother (Emma) and Epps is at home as a comedian named Satin. See previous article here.
http://www.blogger.com/img/blank.gif