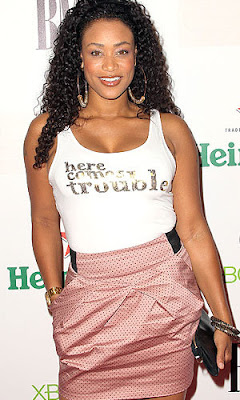 Life got scary and very real for "Basketball Wives" star Tami Roman on Monday when the 41-year-old suffered a mild heart attack. According to her publicist, Roman was admitted to Los Angeles' Cedars-Sinai Medical Center that evening "for a medical emergency" immediately after an online chat she did with VH1 and her fans, during which she revealed she wasn't feeling well.

On Tuesday, Roman thanked her fans for their well-wishes. "Never thought I'd have a mild heart attack at 41," she tweeted. "God has a way of bringing things into perspective. Finally going home 2my kids-heart meds and all."

Roman who is known for her quick witt and fierce temper on "Basketball Wives" — also revealed she would be taking some time off Twitter in an effort to de-stress as part of her recovery. "I appreciate ALL the positive energy & the negative 1's-get a life," she added. "I sure appreciate mine."

Roman, who is divorced from NBA all-star Kenny Anderson has two daughters. Roman also has a movie soon to be released called Life, Love, Soul.

Anonymous said…
I am a nurse and have been one for over 25 years. There is no such thing as a mild heart attack. A heart attack of any kind causes tissue death and is severe. So whether it be "mild or major" it should be taken seriously and lifestyle changes made.
March 29, 2012 at 4:02 PM

Damzel In Distress said…
Hi Tracy, thank you so much for commenting and reading my blog. Please keep coming back. Your comment are always welcome.